So, if you've wondered why I don't blog much anymore, I can sum it up in one word: Rosemary! Listen to the story of my afternoon and you'll understand even more... 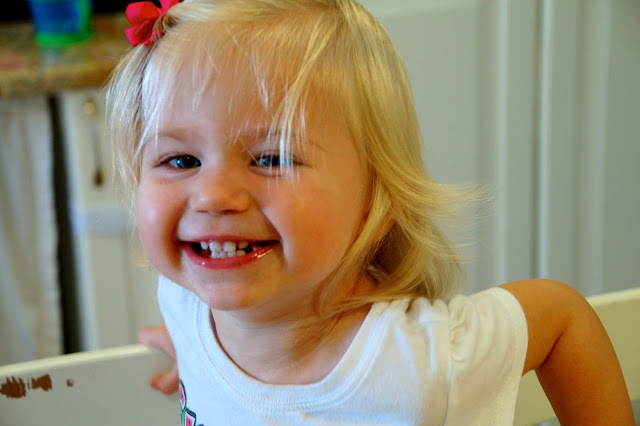 Rosemary has climbed up to the kitchen island and found the box of Cinnamon Toast Crunch left out. Probably not the healthiest snack for her, but these days I'll give her almost anything with calories that she'll agree to eat. So I sprinkle out a small handful on the counter and leave her sitting there, munching happily.
I'm just in the living room, getting the last of our Christmas decoration out. I get a few things out, then come back to check on her and see if she's done with what I gave her. She is- and she's helped herself to more. A LOT more. She has pulled the bag of cereal out of the box, and poured it out on the counter and floor. Thankfully there was only about a bowl and a half left in the bag, but- remember- it's Cinnamon Toast Crunch, so now there is cinnamon sugar covering the counter, chair, floor- and child! I scoop as much cereal off the counter as I can onto the plate Georgia left on the counter after lunch. I set Rosemary in a chair, and the plate in front of her. Then sweep up the rest of the cereal and sugar off the counter, chairs and floor. I give Rosemary a sippy cup of milk to go with her cereal, and move the cereal from the plate to her snack catcher cup, where I assume it will be more safe. She is again munching happily.
Oh yea- she also pulled all the Christmas cards down and had them all over the counter. I try to get most of the cards unbent and back in the card holder. (Sorry if there's now a big crease in your sweet family's face on your card! We DO love you!!)
I go back to the living room and get out a wreath. I untangle it's ribbon and come back to the kitchen for some scissors.
Oh, Rosemary.
She is bathing in her milk. If she holds her sippy cup upside down and shakes it, the milk drips out. She has a nice little puddle going on the counter and in her lap, as she wiggles her legs back and forth. I clean up the milk.
As I go back to the living room I find my water bottle where Rosemary dropped it earlier, after stealing it off the table. It's open and laying on it's side, so there's a nice puddle runnning out of it too, towards the rug. Clean that up, and put the water bottle on higher counter.
Get my wreath straightened out and hear Rosemary chattering and shaking her snack cup around- like a little maraca. How cute- she's making music!
Except I come into the kitchen to see she's NOT making music, but- what else- another mess!
She is shaking her snack cup upside down, so all the darn cinnamon sugar from that darn cereal is shaking out like a sprinkle shaker and the counter, chairs, floor and child are once again covered. To top it off- the milk cup was thrown on the floor, laying upside down, making yet another puddle.
Snack time is officially over! I get the little broom and dust pan yet again, sweep it all up yet again and clean up the puddle. Rosemary is standing on the chair, yelling Ahhhhhh, Ahhhhhhh, Ahhhhhh because I've taken away her cereal so she's not having fun anymore AND she's realized she's covered in sticky cinnamon sugar and she HATES being covered in anything, let alone anything sticky.
SO she gets a bath.
Then straight to naptime.
As I snuggle her in my arms, clean once again, and we sing Nighty Nite together before laying her down, I take a deep breath and let myself fill up again as I look into her big blue eyes. I know she'll lay down and take a good nap, despite a tummy full of cinnamon sugar, and when she wakes up the messes will start all over.
But, in that sweet moment, I know it's all worth it.

More supporting evidence- another mess, another time... goldfish anyone?? 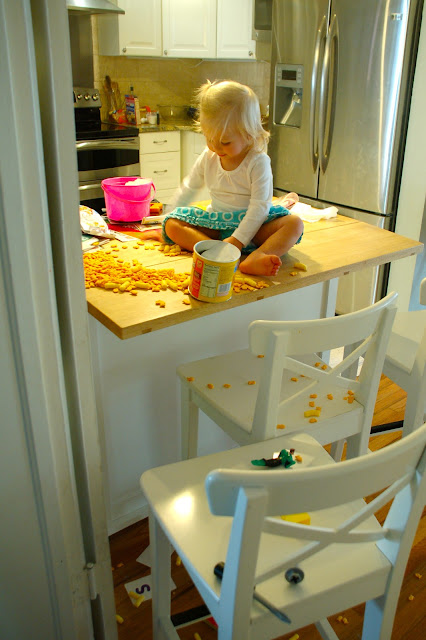 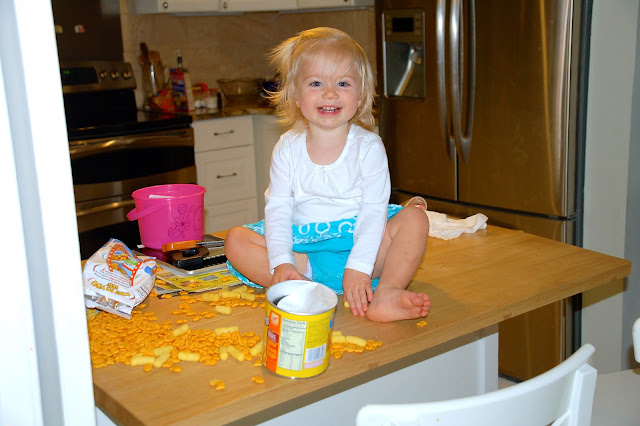 I can't believe this laugh out loud tale has no comments!! That's our precious BOLD baby girl who walks to her own drummer!! As I've said, this child will test us all as she redefines Hipp order... But why shouldn't she be like so many other third babies! Get ready world and hang on mommy and daddy!