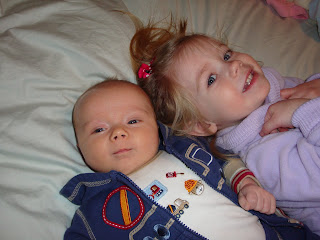 As Lincoln starts learning to makes noises and give smiles, his big sister is realizing he is a little person, not just some big doll mommy is carrying around all the time. She is interacting with him more: giving him kisses- especially on his toes; wanting to hold him- for 30 seconds, tops; sharing with him- unfortunately for him, she likes to share large, hard things like her milk cup, bus, or the baby doll with the unusually hard head. Oh yea, and she shared her cold with him! 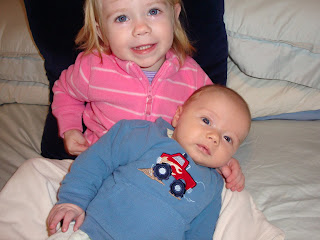 She even helped undress him one day- while he was in his swing, when mommy wasn't watching. I turned around for a second and all of a sudden the baby was naked! Which he thought was hilarious, by the way. 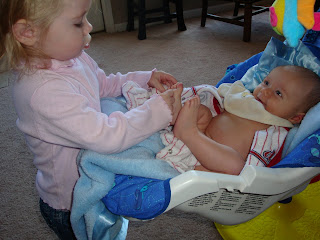 She makes sure he has his paci all the time, where ever he is, whether he needs it or not. Though I don't allow her to put paci back in his mouth anymore, unless it's an emergency- ie. he's screaming uncontrollably when I can't get to him, because she seriously jabbed him in the eye with it recently!
Ever since we learned that clapping makes him laugh (as much as a 2-month old can laugh), she loves to clap his hands, saying "yea kink-kn" (Lincoln)! Like in this video:
Overall I think she'd agree that this little guy is a keeper, and that we all love him very much!
Posted by Kathryn at 11:01 AM

I love that Georgia undressed Lincoln in his swing! That picture was priceless. See you soon!

So adorable!! Oh my goodness, Georgia is such a great big-sis! I love that Lincoln "giggled" with the clapping. That is just priceless!