Every so often- and more often than not, lately!- I have these little moments that I can only describe as "mommy moments". They usually happen unexpectedly and cause some sort of exclamation, like "Oops!", "Yikes!", "Uh-oh", or maybe even "Awww". And like the sitcoms we grew up with, there's always a lesson at the end. I had to record a few of these here, because, like all life moments, they pass by too quick!


Oh No(se)!
Last night Georgia was finishing her dinner with a handful of Craisens. I looked up at her just in time to see her messing with her nose. Before I could get "what are you doing?" out of my mouth, a look of shock and fear crossed her face and she started frantically sticking her finger in her nose. I knew right away- a Craisen was up in there. I grabbed her hands and Larry ran for the tweezers. She was screaming already and I tried to calm her down so she wouldn't suck it in further. Larry held her head while I went in after it... but only half a Craisen came out. "Maybe that's it?" Larry said, but I knew- Craisens don't come in halves. I ran for the flashlight while thinking- 'Doesn't the nasal passage lead to the brain? I can't be good to suck a Craisen into your brain!' Sure enuf, with the light we saw more Craisen. I was about to go in after it, when WHOOSH- it landed in a boogery mess on the high chair tray. She blew it out! Crisis averted!
Lesson: NOTHING GOES IN YOUR NOSE!!
A little nose, without Craisens in it! 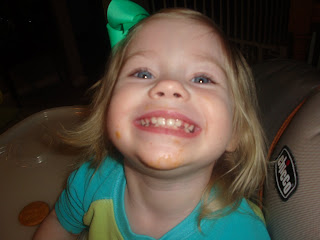 Spit it out!
Recently I was in the living room feeding Lincoln, when I realized Georgia had been back in our bedroom for a while. By herself. Not good. I yelled for her to come see me and out she came- chewing something. I immediately told her to spit it in my hand. It looked like a candy conversation heart from Valentine's, but I knew (b/c I made sure they were gone!) there weren't any more. I smelled it and realized it was a Tums. Hmmm, can not-quite-2-year-old's have Tums? How many had she had? Can you have too many? I called her pediatrician's office; they referred me to Poison Control. That's the real Mommy Moment- having to call Poison Control for the first time! They had me give her lots of fluids and watch her for an hour, just to make sure her tummy wasn't upset. Apparently too many tums could upset a tummy, instead of help a tummy! She was fine- and now we have a baby-proof doorknob on our bathroom door. Lesson: Always shut the bathroom door and Don't eat things!!
PS: The Poison Control # is 800-222-1222... You never know when you're going to need it!!


Uh-oh
A few weeks ago we were at a friends house for playgroup. Georgia was the only "big kid" there that day and was trying to stay out of trouble, but... She followed my friend into the bathroom, then stayed in there when Jenny left. Then she closed the door- and locked it, locking herself in! Jenny lives in an older home, the kind with no way to unlock a bathroom door, the hinges to the door are on the inside, and the windows are all painted shut! So our options to get Georgia out were: break the window, bust down the door, or Georgia had to unlock it. And it was not a normal little lock on the doorknob, it was a old-fashioned, deadbolt style, under the doorknob lock. After weighing these options for about 15 minutes, and talking thru the door to Georgia to "turn the little knob- no, not the big door knob, the little one under it!"- wha-laa!! She unlocked it herself and came on out! I'm still not sure how she unlocked it, except God answers prayers and guided her little hand!
Lesson: Do NOT play with doors! ANY doors!!
Georgia and the bathroom door she had to unlock! 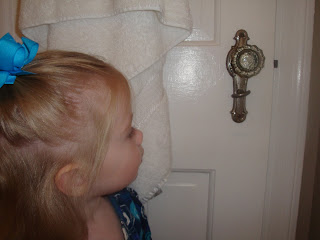 If you happen to have this style doorknob & lock- beware of little ones! 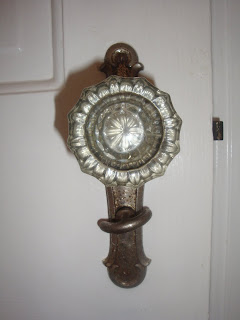 Awww
One more- this is just a sweet moment I had yesterday. We were driving home from the store when I heard sweet little noises coming from the backseat. Lincoln was awake and talking to his big sister- and she was talking back, copying his little ooos, ahhs and squeals. It was so sweet! Usually she doesn't pay him any attention back there, probably b/c he's usually asleep, but he had slept thru our shopping, so was awake and conversational! That was a very precious mommy moment!
Lesson: Sometimes the sweetest moments happen when you're not even trying!
Sibling love! 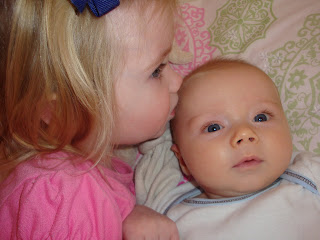 Kathryn!
I so enjoyed reading this post! I was in suspense during each mommy moment! Uh-oh! What happens!????!! Keep reading and find out! :)

Actually, I learned some good lessons, too, as a mommy! So, thank you for sharing!

When I was probably about Georgia's age, I stuck ANYTHING up my nose! :) Flip flop pieces, raisins ;), everything! My mom was reminding me and Russell about that just this week! Ha! She said that you have to be so careful using tweezers up your child's nose b/c there's a fine membrane up there that you can evidently hurt pretty badly! So, she said you can always use pepper to make your child sneeze. I tell you what, God was GOOD to allow for that snotty sneeze! :)

Love to you guys, and thank you for the congrats to Russell!! :)

This was just hysterical and like Shireen, I kept looking for the next line! We definately have a very curious miss Georgia and I know how busy you are just trying to keep track of her! At least she doesn't pull things that look like raisens into her mouth like her mommy did! I've been doing Friday conference calls on the deck today and looking across the canel as Stephanie is working in the back yard with her granddaughter who is about 2. It's a 70's sunny beautiful Fla day and I sure wish you were all here to enjoy!! Give the whole family hugs and kisses from grammie!

Great idea about using pepper to cause a sneeze, Shireen! Thanks for the comments!
KH

Very funny and touching post. It makes me wish I had written dow all of the stories about my kids when they were little. Like my daughter eating sheep droppings thinking they were raisens, when she played in the water trough and drank from it and the many times we would be working down at the barn and I would turn around to find her missing -- I would run for the swimming pool and look in the depths -- sigh a sigh of relief not to find her there and go find here playing with a lamb in one of the pens. Oh-- thats right -- that is you!---- GrandDad