A Tribute to Bernie 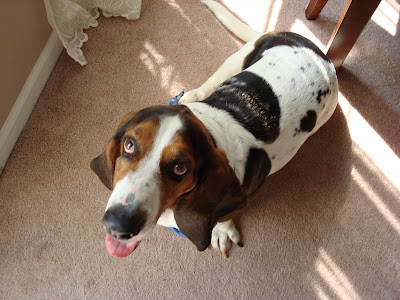 We recently said "Goodbye" to our first 'add-on' to the Larry & Kathryn family- our basset hound, Bernard Macmillion Hipp, aka Bernie, Berns, Bernman, Ba, B... As our family has grown and become more chaotic, Berns was getting left in the dust, which was making his ears droop more than ever. We finally battled the Guilt of not giving him enough attention vs. the Guilt of giving him up, and knew in our hearts that letting him go to a family that would love on him the way we want to, the way we used to but don't have time for anymore b/c our life is full of feeding, cleaning, & chasing our other two, was the more fair thing for him. It was a very hard decision. One that we've come up against several times in the past and we refused to make. A decision that battled our love for him, for he really was a sweet member of our family, and our own pride, thinking we could "do it all"- and have a dog too! I even didn't want to blog about it at first, b/c I felt bad that we had to let him go...
He had his "pitiful look" down to an art! 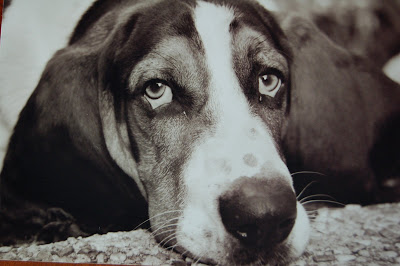 We loved taking walks by the creek. 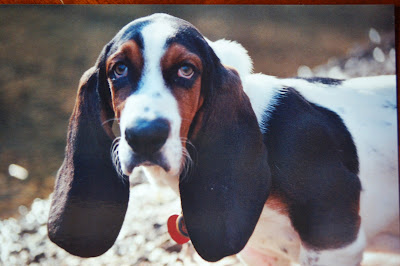 But it's such a good thing for all of us, especially Bernie, and I decided to shake off the sadness of it and blog a little tribute to him! He was such a special part of our family, he deserves one last hurrah. And this blog is to document and highlight our whole life as a family, the ups, downs and in-betweens. Letting our sweet puppy go to a new home is all of those!
When Bernie was an "only child", all the pictures were of him! 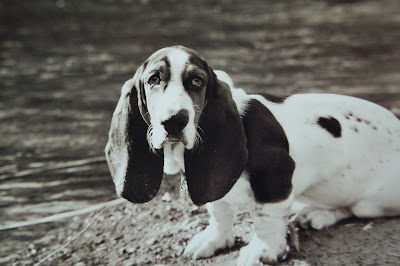 First Christmas- he was scared of the firetruck coming by with Santa! 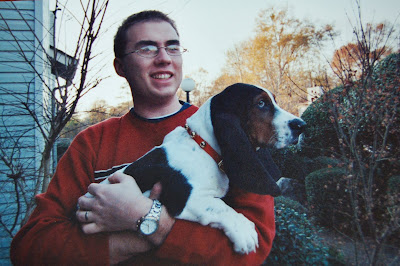 We got Bernie 5 months after we got married, October of 2003. He was just a puppy, and those sweet, soft ears melted our hearts! He wined and whimpered all the way home, and all through the first night. We should have listened to the signs...
Such a sweet little pup! He used to run and trip over those long, soft ears! 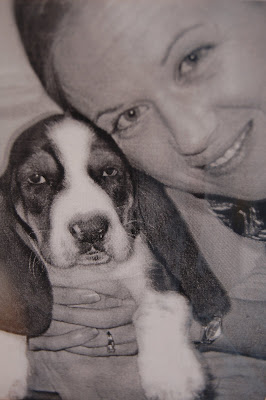 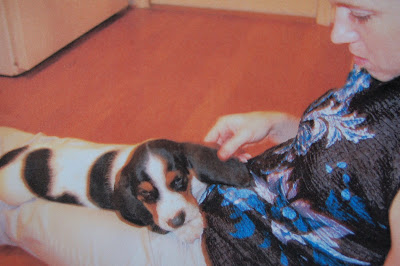 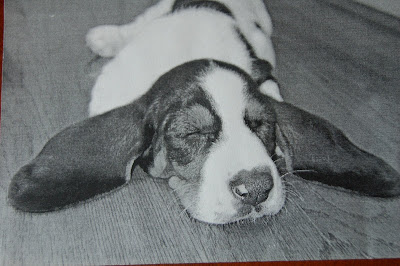 He was the most wild puppy I've known! He ate everything- the wooden leg on our dining room table (where a chunk is still missing), all the way thru the wood legs on our bar chairs, one whole section of carpet in our town home- including the padding, a basket of pine cones I put out for decoration our first Christmas, even rocks from the pebble-gravel in the backyard. He refused to be housebroken for over a year. He misbehaved constantly and barked incessantly. Yet we still loved him. Well, I loved him- I think Larry only liked him at that point! Larry was traveling lots for work at this time, and Berns was my constant companion. We took long walks along the creek trails, played in the soccer fields and snuggled on the couch. (This was back when he was little and allowed on the couch!)
Hoping to steer his chewing away from furniture, we would give him the long cardboard tubes from wrapping paper- he would completely shred them! 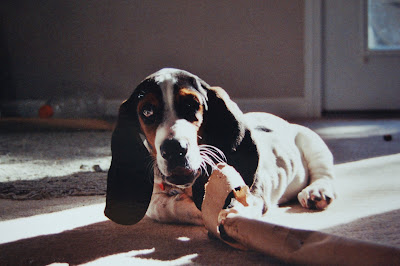 He continued to grow, and GROW- who knew bassets were such big dogs! It was like having a giant Labrador with short legs. And stubborn, troublesome attitude. We moved and he got a big backyard. As we were moving into our new home- literally as we were lifting the door on the Uhaul- Bernie offered us an introduction to our new neighbor. He was staked in the backyard, which was then unfenced, and barking up a storm. Our neighbor came out, and as I walked toward her with a smile and handshake offered out, she glowered with hands on hips and asked "is that dog going to bark like that all the time!?" and proceeded to lecture us on the quiet tranquility of this end of the neighborhood. Welcome, neighbor! (We have since made peace and gotten along quite well with said neighbor. And I guess she came to accept the Bernman, b/c yes, he did bark like that most days!)
Happy Halloween, 2007 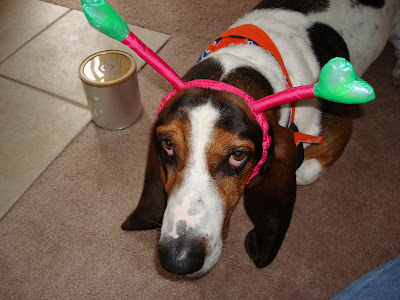 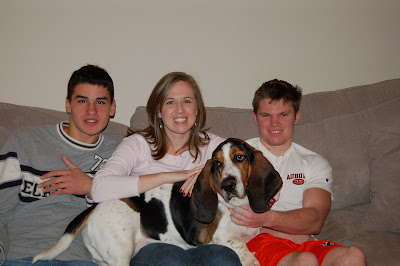 But as the years passed, Bernie, and our family, matured and grew. When we brought Georgia home, we wondered how he would be with a 'little sister'. He was wonderful and loved her from the start. He always respected her boundaries, but still didn't mind when she invaded his space. He would lay with only the tip of his nose over the edge of her blanket on the floor as she played, and as she learned to move, she would bring toys over and bang him with them. Still, he stayed close by! One of her first recognizable words was "Ba", for Bernie- before even saying mama and dada consistently!
He posted himself "guard" next to Georgia's bassinet. 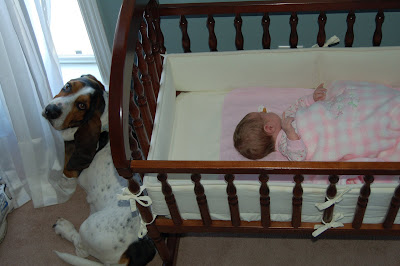 An attempt at a Christmas picture together (which I did not end up using), 2007. 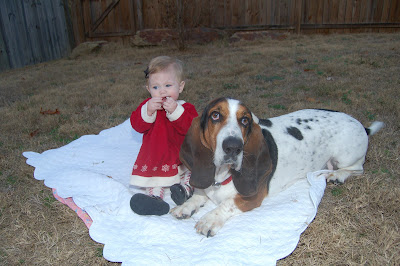 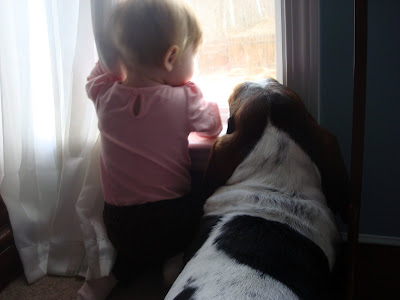 The literal definition of "parallel play". 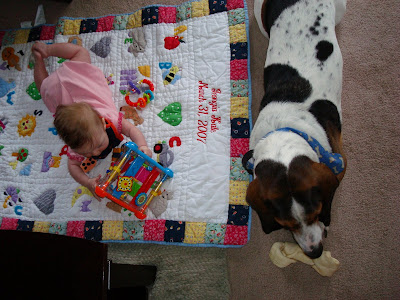 Then we added Lincoln to the mix and our pace doubled. We were (are!) balancing new feeding and napping schedules, gym class, playdates, potty training... and Bernie was finally slowing down. He was finally outgrowing his long puppyhood, and the hound in him was taking over. He was ready for long naps in the sun, slow walks in the woods with time to sniff each leaf, and extra belly rubs. Except, around here, naps were usually interrupted by someone crawling over him or banging into him! We could tell he was getting frustrated, though he always continued his sweet demeanor, and we were finding ourselves frustrated at him for nonsensical reasons.
Newborn Lincoln & Bernie, napping in the sun. 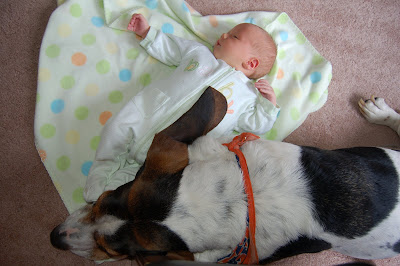 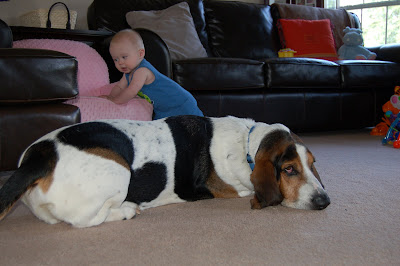 And I couldn't be happier about the new family we found for him! They had a basset before, have done several basset rescues (were you "foster" a hound for a time), currently have a little basset girl and wanted a sibling for her. They love their dogs and even take them to the beach with them. (I still can't picture Berns frolicking in the sand and surf!) Bernie gets to spend his days getting all the attention he could want and his nights curled up with his sweet new sister. His new momma promised to take good care of our "first child" and keep in touch. She even sent me this picture of Bernie and Lillie (hopefully you can see it- she doesn't know me well enough to know I'd want to put it on the blog!): 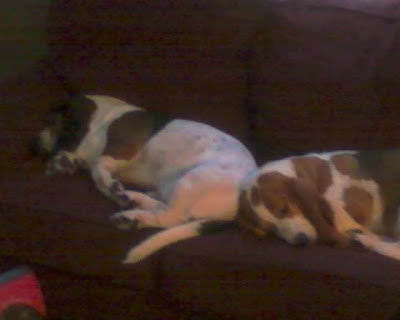 We love you, Berns, and always will! Here's to many more years of drooling, ear-shaking, scent-chasing, sun-sleeping fun for you!
I tried to take some last pictures of Bernie & the kiddos... well, a dog, 2-year old and 7-month old do NOT cooperate for pictures (esp. right before bedtime!), so this is all I got! :) 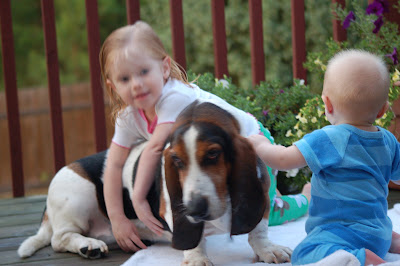 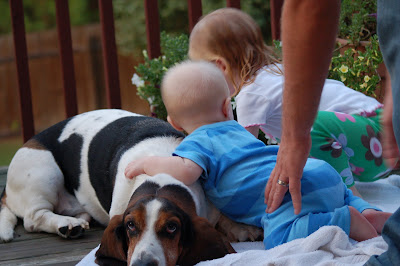 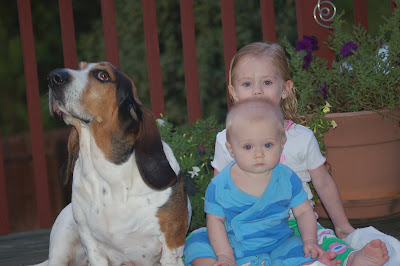 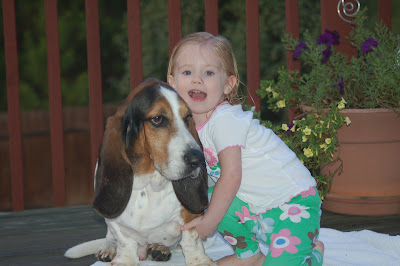 B had a great few years with the Hippsters and you have found a wonderful next place for him! He looks like he has a girlfriend and is snuggled on the couch. The other thing he did was teach your kids to love dogs and it's so great to see how comfortable they are around BIG dogs like Bernie or Morgan. I'm sure the time will come when you get another dog for the kids....but know he's in a great place while you prepare for whatever the future holds! Hugs! Grammie

love to you all and Bernie!

Oh Kathryn, I am so sorry Bernie had to go. I remember when he was your new puppy. I am really glad you found him a loving home with people who want to keep in touch. Looking at all the pictures made me want to cry. I tend to get all mushy over dogs though.

What a great tribute to Bernie! You will always remember your early years as a couple family with fond throughts of Bernie :)