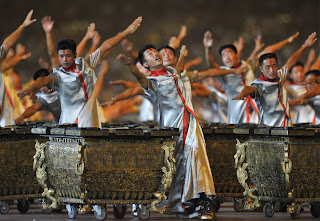 We enjoyed a fun weekend with lots of Olympic-watching. Starting Friday night, Larry & Georgia watched the opening ceremonies while I spent some girl time celebrating good friend Jenn's coming baby boy. Larry was amazed how Georgia sat in rapt attention as the opening ceremonies played- her favorite was in the beginning when hundreds of drummers pounded out a rhythm with lit ancient drums. She liked it so much Larry replayed it thru our DVR and she sat & watched it again! She even sat & watched it once more as we played it Saturday morning so I could see it! This is the child that won't even sit for Sesame Street, but Olympic drummers definitely grabbed her attention! 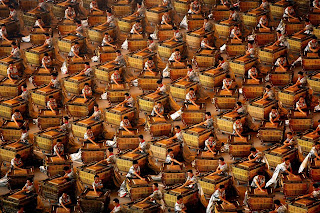 We watched various other events throughout the weekend, including beach volleyball, water polo, soccer, swimming, gymnastics & badminton. The most exciting definitely was watching Michael Phelps and the 4x100m relay team "smash" the French late last night and win gold! We were bleary-eyed this morning from staying up so late to watch it, but it was really incredible!! 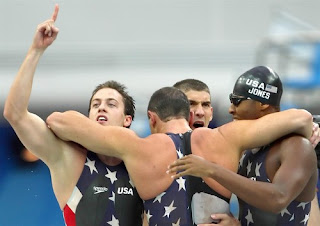 Saturday, Georgia showed us her Olympic training at the pool, and then Larry & I got to go on a date night, with big thanks to Matt & Sandy for watching Georgia for us. We saw The Dark Knight, which was very good & we'd recommend seeing in the theater, and enjoyed a leisurely meal at Firebirds, where I didn't have to feed anyone but myself or clean the table! It was great! 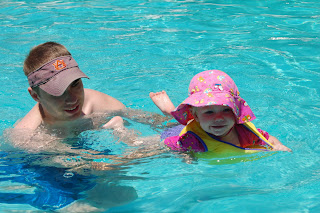 Georgia is taking up the competitive spirit of the Games and determined to master the fork & bowl this weekend. She wanted to eat everything with her fork, by herself, and some in a bowl. She's doing pretty well with it and, thankfully, is yet to poke her eye out, which I stay on the watch for! 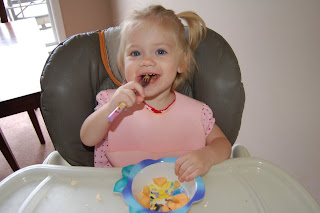 I also presented her with a new challenge today- sleeping without paci! (For readers without little ones- a very big deal!!) She'd already weaned down to where paci doesn't come out of her bed & I even take it from her after she falls asleep so she doesn't have it when she wakes up, but I decided it was time for it to go completely because she's getting very attached to & demanding of it. I read online many mom's paci-weaning experiences & decided the best route for us was cutting the tip off the paci. (Don't worry, it's not a choking hazard.) That way she can still physically have it, but it doesn't "paci" very well. I did it for her morning nap, and so far- so good. She just looked at it funny like , "hey- this thing is broken!" but held on to it while she learned to settle herself down to sleep. It took her a bit longer to fall asleep, but no tears or screaming! Pray it goes well this week!
Posted by Kathryn at 11:04 AM

The paci thing is hilarious! Way to go, Mommy! I hope it goes well for you guys. :)

You don't need that thing Georgia! Hope you still continue to be such a great sleeper!!! Hugs baby girl! Grammie