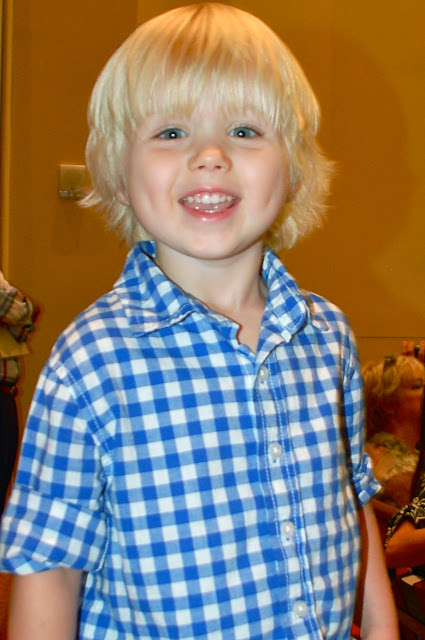 In the same manner, Lincoln now has his "Grandpa". Grandpa actually came around soon after my dad left on his latest boat trip, when he was cruising around the FL Keys for several months. We don't know if that's what triggered Lincoln's Grandpa- kinda a Grandad substitute, or if he was just ready to have his own "friend" so he didn't have to always play with all the Banana Daughters. I think it was a combo of the two circumstances.
Grandpa has stuck around, even though Grandad is back, and Grandpa basically gets to do all the things Lincoln doesn't get to do, or the outrageous things that even a 3-year old wouldn't do. And we get to hear about it all day long...
"My Grandpa's favorite cake is worm cake. He eats worms. And spiders."
"My Grandpa doesn't ever take a nap. He plays all day long."
"My Grandpa gets to eat ice cream even when he didn't eat ANY of his dinner."
"My Grandpa is sleeping on the roof" (Oh- isn't he afraid he'll fall off?) "No, he has sticky shoes. To help him climb up. So he sleeps up there all night long."
"My Grandpa has special pj's. They can turn into a bulldozer, a car, anything."
"My Grandpa has a special golden fan that is Gold. And it has a booby trap in it. My Grandpa's Grandma (Grandpa has people too!) fell into the booby trap and got stuck in some sticky mud. And she's still stuck in there."

As I was giving Lincoln his final goodnight hugs and kisses one night, he had one final thing he HAD to tell me:
"Mommy, mommy, mommy, mommy... (this is how most conversations start around here!)
"My Grandpa, in his toolbox, he had a big screwdriver. And he put the screw in the wall and screwed it all the way in, and put the wall up. And he made a big hole in the wall. And in the big hole, there was a worm. And my Grandpa- he ate it ! Yep. He ate the worm. That's what he did, ate that worm."
(He looks at me with that mischievous twinkle in his eye)
"That's what he did, Mommy."