I've been wanting to post these pictures from this past weekend, so, even though we have fun pictures from our outing today to post, I'll save those for tomorrow and post about the weekend before the weekend is too far past!
Saturday morning Georgia & I made a special breakfast for daddy. She helped me make french toast (or "french bread", as we called it b/c she knows what "bread" is but not "toast")- breaking the eggs, stirring, shaking the cinnamon, putting the bread in the eggs, and helping us eat it up- in bed! Yep, we brought daddy breakfast in bed! He said that was the first time he'd ever had breakfast in bed, so we might have to do it more often. Georgia thought it was great fun eating with us in bed, and ate lots!, so we'll have to try it again for her. I wonder if our little vegatarian would try breakfast sausage if it was eaten in bed??
Yummm, bread! 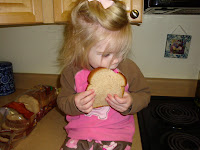 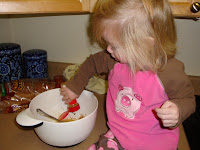 Oops- too much shaking!! 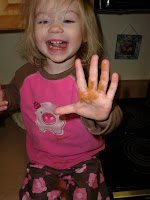 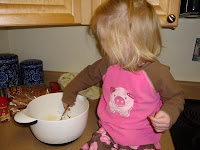 Saturday night the 3 Phelps came over. That was special because it was Logan's first time to our house, and one of his first big outings. Larry grilled some steaks, and after we and all the kiddos ate, the girls watched Miss America upstairs and the guys watched Saw V downstairs. And of course we had to get some shots of the boys together, even though they were both sleepy!
Lincoln (8 weeks) & Logan (3.5 weeks) 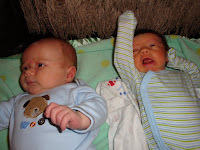 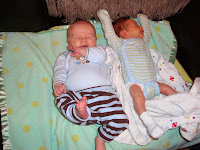 Can't we just go back to sleep, mom?! 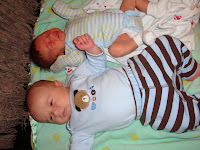 Look at that big moose Lincoln next to little Logan! What a chunk!! I bet Georgia loved eating in your bed but that's not a habit I'd encourage too often....I can see the crumbs piling up now and bernie jumping up and Larry not Happy at all!! I am making plan to head your way so can't wait as it's been 4 weeks which is way too long for Grammie! Hugs and kisses and snuggles!!

PS when we were at Pate's seeing Kristy, they have a web cam set up so they can see live pictures of Aidan and Andy & Kristen. Will someone please show Grammie how we can set that up on my home computer so we can see the babies some days live???? Grammie again